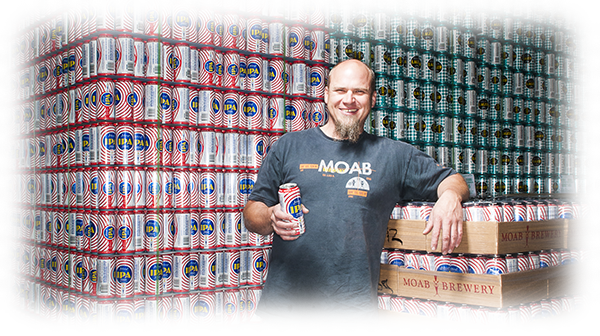 Jeff Van Horn’s brewing interest began at home in 1988 with a friend saying “It’s a good way to get a strong beer in the state of Utah!” It was in 1997 that he broke into the microbrewery industry as a keg washer. Through his hard work and desire to learn, he eventually found himself running a bottling plant. Jeff joined the Moab Brewery team in 2002 and has been responsible for all aspects of our brewery which still includes washing some kegs!

He has been awarded many medals over the years for Moab Brewery’s quality ales and lagers including two prestigious awards in 2014: a Silver at the World Beer Cup® for Squeaky Bike Nut Brown in the session beer category and a Bronze at the Great American Beer Festival® for Rocket Bike in the American-Style Lager category.

Please enjoy Jeff’s labor of love - ales, lagers, and fresh-brewed sodas. We are proud to announce our Desert Select Ale brewing program, offering a limited quantity of a unique style of beers which are brewed and bottle conditioned on site, tipping the scales at almost 9% alcohol. Ask your server for today’s selection. Cheers!